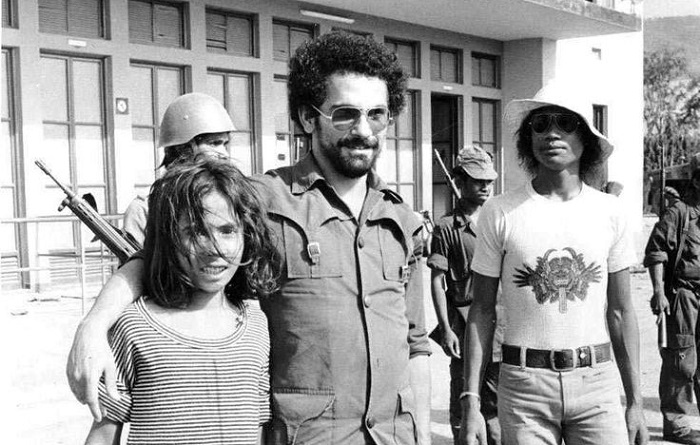 Before he was renown as a Nobel Peace Prize laureate, Dr. José Ramos-Horta was known internationally as a fiery advocate for the people of Timor-Leste (then known as East Timor) and at the same time, a highly skilled diplomat, negotiator, and peace maker. In exile from his country for the better part of three decades, he had been the international voice of the Timorese population while they struggled to survive as a nation against one of the most brutal regimes of our time.

From 1975 to 1999 Timor-Leste, (formerly known as East Timor), a small island and former Portuguese colony at the bottom of the Indonesian archipelago, was invaded and occupied by Indonesia. Over the course of the 24 year invasion, one third of the Timorese population perished.

In exile for the entire occupation, José Ramos-Horta worked to build a human rights network to defend the rights of the Timorese — walking the halls of the UN, addressing the security council, and working tirelessly to ensure his people were not forgotten while they suffered. 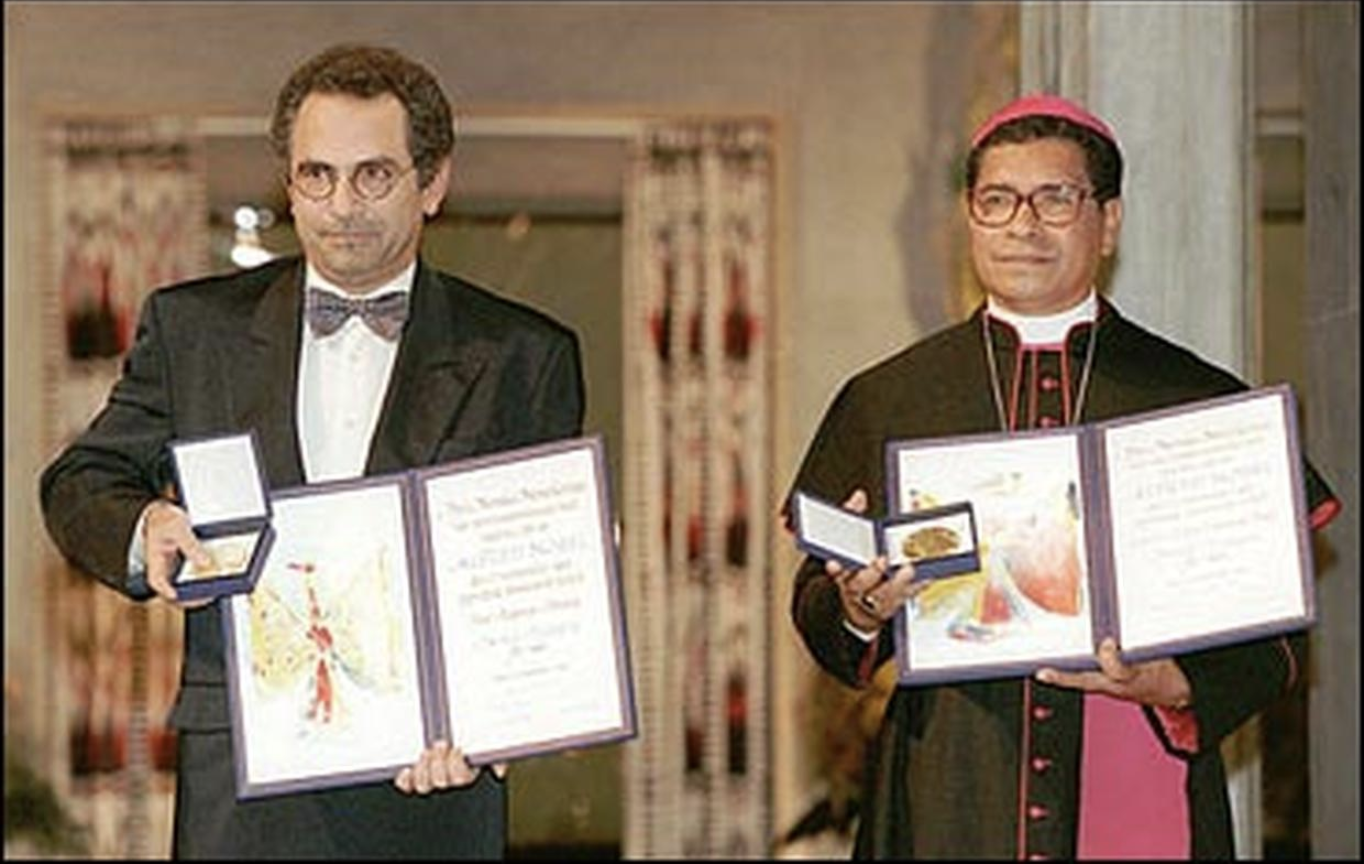 In 1996, José Ramos-Horta and Timorese Bishop Carlos Ximenes Belo were awarded the Nobel Peace Prize “for their work toward a just and peaceful solution to the conflict in East Timor.”

In 1999 the United Nations sponsored a referendum, allowing the Timorese people to vote between independence, and remaining a part of Indonesia. The country voted overwhelmingly for independence.

But the story was not over. When the referendum results came in, pro-Indonesia militia who had been put in place across the countryside were unleashed, virtually burning the country to the ground. 85% of the buildings in Timor were set aflame. Hundreds of thousands of people were displaced – at gunpoint – to West Timor and other parts of Indonesia. An unknown number, including foreign journalists, and men, women and children taking refuge in Churches, were massacred.

The rampage was halted by the arrival of a UN peacekeeping force on September 20, 1999. The UN then established an interim government to administer the country and prepare the country for the transition to democracy.

José Ramos-Horta returned from exile on December 1, 1999. Throngs of Timorese crowded the airport and streets to greet him and celebrate his arrival home. Assuming the post of Senior Minister in the new government, he quickly began work to help build a new democratic government in his country, becoming one of the chief architects of the new country’s government. 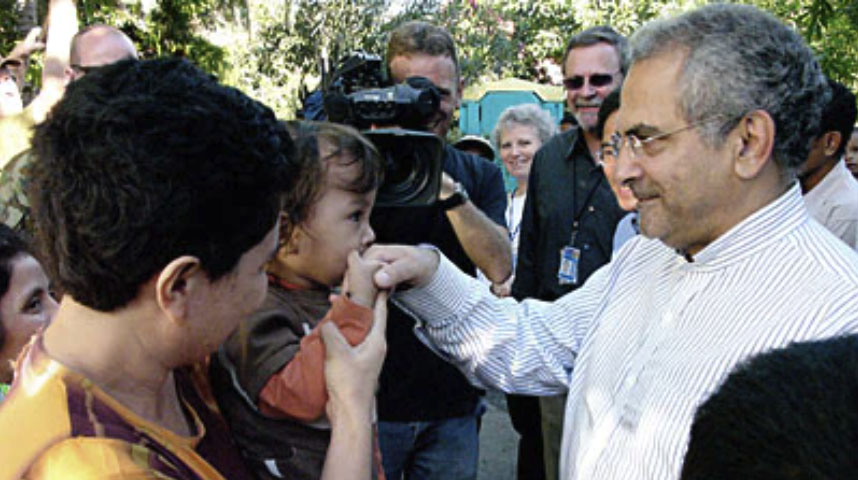 In 2006, the island of Timor-Leste, still getting on its feet as a young democracy, exploded in new violence, when a group of more than 500 split from the army. Amid burning buildings and gangs rampaging in the streets, the Prime Minister was forced to step down. José Ramos-Horta, at the time Timor-Leste’s Foreign Minister and Senior Minister, was asked to step into the vacant Prime Minister post. At the time the LA Times called him the young democracy’s “last hope”.

The hope was well placed.

Steadily, once Ramos-Horta took office, peace began to return to Timor-Leste. The camps of the internally displaced emptied as people returned to their neighborhoods and began rebuilding.

In May 2007 Ramos-Horta was elected President of Timor-Leste. Assuming the helm of one of the poorest nations in Asia, and a country devastated by conflict, his promise was to serve as the “President of the Poor”. He promised to remain dedicated to eradicating poverty in his country through improved public health and education, and by providing an environment where business can thrive.

On the President’s return to office, the country entered a new phase, a phase of putting conflict behind them, and building a new country.

In his years as Prime Minister and President, working with fellow Timorese hero Xanana Gusmao, and with an unfaltering love for and faith in the Timorese people, Ramos-Horta saw many of his dreams for the Timorese people start to come to fruition, both in the city and countryside.

While serving as President and the international voice of the young government, he personally created peace initiatives ranging from a world class mountain bike “race for peace” to opening his office for youth from neighbouring areas to come and peacefully resolve conflicts. His anti-poverty initiatives, including building homes for the neediest, lifted tens of thousands out of extreme poverty. His leadership and expertise have walked Timor-Leste toward a new era of peace, reconciliation and economic growth. 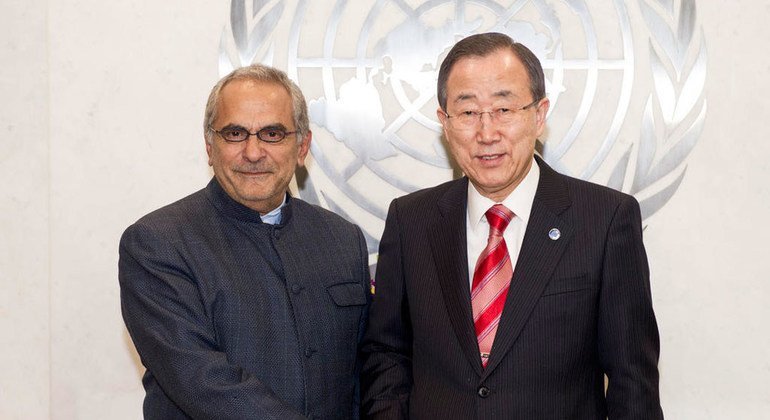 Finishing his term as President in 2012, Ramos-Horta was called on my the UN Secretary General, Ban Ki Moon, to intercede on his behalf in Guinea-Bissau, a small African nation so unstable not one President had finished his term since the country’s independence. At the time Guinea-Bissau was under military coup.

Ramos-Horta went to Guinea Bissau as a Special Representative of the UN Secretary General in January, 2012. When he departed, in July, 2014, he has brought the country through democratic elections and overseen a peaceful transition of power back to the people of Guinea Bissau.

In 2014, at the request of the UN Secretary General he chaired the UN High Level Panel on Peace Operations, a worldwide review of the UN Peacekeeping and Mediation efforts with the goal of making the UN “peace and security architecture” more efficient in preventing and revolving conflicts.  His work and the resulting report and recommendation received international praise. (more information).